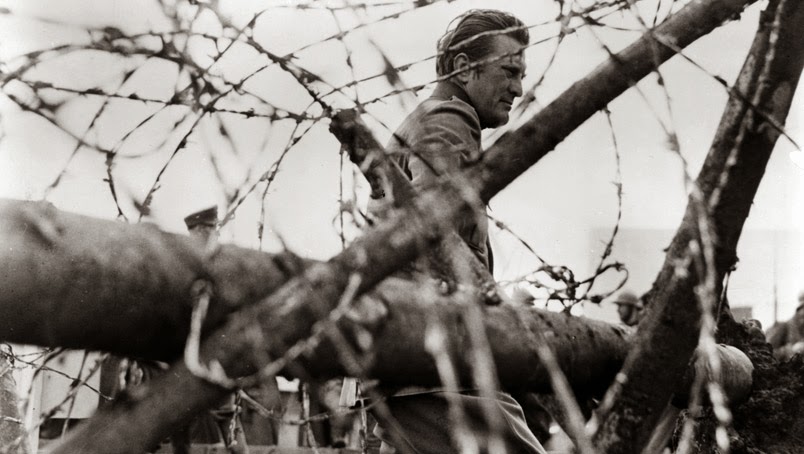 This review originally appeared in Issue 7 of So Film magazine

Three soldiers are condemned to die by their own army’s firing squad when an entire regiment fails to take an impossible German position in Stanley Kubrick’s WWI masterpiece Paths of Glory. Kirk Douglas is the commanding officer charged with defending his men from the corrupt machinations of the cogs of war, in what remains one of the most damning indictments of internecine conflict and crippled humanity.

“There’s no message. It is certainly not a film either for or against the army it portrays. At most, the film is against war, because war is capable of forcing men to make terrible choices.”

Stanley Kubrick had been to war before, and he would of course, go again. For his feature debut, Fear and Desire (1953) the director established an anonymous conflict occurring ‘outside history,’ one which occupied ‘no other country but the mind.’ Little seen until recently, it’s a film of rough-hewn edges and overt conspicuousness, displaying little of the formal chutzpah than would quickly come to define his work. Yet the film also served to employ a default register that he would return to time and again, one that would colour his choices of adaptation and lead to accusations of coldness and distance even from his most evangelical of disciples.

Kubrick was one of cinema’s sharpest of satirists. He was also one of its most subtle. That’s not to say he was always playing for laughs, more that he was seemingly pointedly attuned to the absurdities and grotesqueries of human behaviour, as apparent in his quartet of war films as in his adaptations of those like-minded bedfellows Thackeray, Nabokov and Burgess. Even with his straightest face on, the technological Babel representing the peak of mankind’s hubris comes unstuck in 2001: A Space Odyssey (1968) at the hands of one its own creations – before, of course, being cosmically belittled in the face of a far greater sentient power.

Of course, he’d most demonstrably satirise the machinations of the war machine with the bitingly farcical Dr. Strangelove (1964), but such commentary proves no less penetrating in the dramatic cadences of Paths of Glory (1957), even if this time they’re played out in a distinctly minor key.

If Spartacus (1960) is the one film in Kubrick’s filmography usually considered the odd-man-out, given his last-minute appointment and accendence of control to studio and star, Paths of Glory is in many respects as much of an anomaly, serving as it does as both the director’s most straightforward star vehicle and subversion of the very same.

Kirk Douglas’ Colonel Dax may carry the empathetic air of liberal heroism, bearing the chin and torso of identifiable movie-stardom, but his Pyrrhic victory over one superior officer amounts to little in the all-consuming fog of war and insidiously entrenched corruption.

Retaining the tripartite structure of Humphrey Cobb’s novel – itself based on a real-life incident that took place during WWI – Kubrick fashions Paths of Glory into a chess game of  absurd, Kafkaesque irrationalities, played out between opposing factions of the same side, that of the French army. The lives of three soldiers serve as pawns to be manouevred and taken, just as a conversation on the best way to die in battle exemplifies the futility of what poet Thomas Gray (from whom Cobb took his title) meant when he wrote that the “Paths of Glory lead but to the grave.”

The film begins with a meeting between Adolphe Menjou’s General Broulard and the ostensible villain of the piece, George Macready’s General Mireau in a luxuriously ornamented château. Broulard details the necessity of Mireau’s men taking a key position dubbed The Anthill within the next two days. As we cut from such ornate surroundings to a wide-shot of No Man’s Land, before pulling back into the French trenches, Kubrick establishes the first of a series of oppositional positions that echo throughout the film.

It’s not just in the locations themselves that such dichotomous positions are effected but also in the way they’re shot. There’s a documentary realism to the scenes at the Front, contrasted with the camera’s dance around the decorative interiors of the Generals’ château. A cut from Colonel Dax’ sparse quarters to his superiors waltzing through their ballroom proves as illustrative of each camp’s concerns as a later cut from the aftermath of the execution to Broulard and Mireau heartily tucking into their lunch.

Kubrick’s rightly celebrated tracking shots through the snaking trenches also serve as echoes of Thomas Gray’s poem, each portents of a character’s fate. The first follows General Mireau as he delivers the attack order to Dax, whilst the second sees Kirk Douglas’ Colonel marching towards the inferno of the Anthill assault itself, his men cowering against the walls. The final shot sees the three prisoners – victims of a ludicrously arbitrary selection process – led towards their execution, Kubrick’s pitch black humour barely submerged as one stumbles and wails, while another is carried on a stretcher, unable to stand.

If the shambolic courtroom scene that sees the three soldiers sentenced to death for cowardice – taking place in a vast hall of the château, its chequered floor further illustration of the war games at play – allows for Douglas to make clear his (and no doubt the audience’s) position, it’s a later scene that allows for Kubrick to propose the aforementioned subversion of any such heroics.

“You’ve spoiled the keenness of your mind by wallowing in sentimentality… You’re an idealist, and I pity you as I would the village idiot,” says General Broulard after a futile outburst of righteousness from Dax. The Colonel can shout all he wants about the preceding “mockery of all human justice”, but it’s the General’s witheringly muttered “unfortunates” that sound the loudest, as he exits the only one left unscathed.

Kubrick’s cynicism abates for a brief moment in Paths of Glory‘s celebrated final scene, as a young German girl (Susanne Christian, the future Mrs. Kubrick) is hauled onto a stage in front of a baying mob of soldiers. “A little pearl, washed ashore by the tide of war,” she begins to sing, as the crowd’s boisterousness shifts to hushed and affected nostalgia. It’s a starkly unsentimental moment, the most purely emotional in all of Kubrick’s work, a crack of humanity in the armor of those in the film’s final lines given the order to return to the Front.